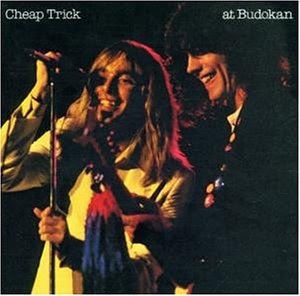 Anyone old enough to remember the classic 1978 “Cheap Trick At Budokan”? When I was like 12, my friend Dave had a copy and he used to play it at parties, particularly at our other friend Dave’s house where we had parties because his parents were nice people and we got to use their hot tub and sauna. Sometimes there was making out with girls in the hottub, except not by me, or really anyone else but the first Dave who was WAYYYYYY more advanced than the rest of us. I also remember us playing a lot of air guitar in the living room. Also, standing around in the kitchen eating Ruffles and onion dip. It was pretty cool.

But I digress. This past Saturday, 1/9/2010, at Budokan, the famous Japanese band “Dir En Grey” was playing. A sound check was happening inside. It was all like Metal and stuff, I guess. At some point they started doing something involving a LOT of bass that made metal stuff on the building start rattling. It really didn’t sound like awesome bass, more like some dude waiting at a stoplight in his crappy Buick, playing gangsta on his crappy stereo and all you can hear is the rattling.

As it turns out a LOT of awesome bands have played at the Budokan. It’s where the Beatles first played in Japan. Huh, who knew. In any case, after taking these pictures, I stood around drinking a can of vending machine coffee near some Japanese teens who were sitting around and smoking and then I went to the Crafts Gallery of the Museum of Modern Art. The show there (The Power of Decoration ―A Viewpoint on Contemporary Kôgei) was awesome, but not as awesome as Dir En Grey’s show that night, I bet. (By the way, saying I went to a crafts gallery instead of a rock concert sounds as lame as it makes me feel.)
at 6:02:00 AM