That's really it: the streets are really, really wide, the sidewalks are mostly, but not totally empty. The downtown's quiet, despite visitors to the Temple Square. There's a lot of space and not much of anybody. Except for men in black suits and white shirts, and women in decent dresses of cotton, with little flowers on them. And some tourists. And a surprising number of really indigent folks. The central downtown is skyscrapers mixed with hotels, a shopping mall with all of the mall brands connected to the train station, some restaurants, and of course, Temple Square and the associated musuems "Family Library" geneology center, and other church accoutrements. Get a little outside and it's pawnshops and jiffy lubes, Smokes 4 Less, strip malls, and Chinese buffets all you can eat plus drink for 7 dollars. Look toward the horizon, and it's factories and refining and smelting. 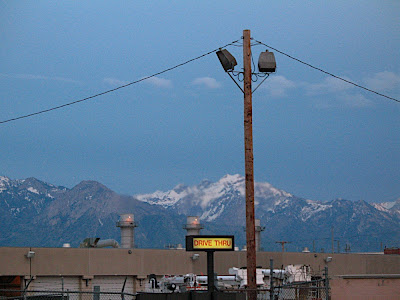 Under the veneer of clean clothes and slick multimedia-displays about Joseph Smith is a grimy, depressed, blue collar town in the desert. Not that that's necessarially bad, but when you notice that, it's harder to take the central LDS experience so seriously. You realize how much it's for show. The super tidy couples with baby carriages and gaggles of children, just happen to be strolling around the Square in the afternoon. Why would they be there? Making things look good? Demonstrating happy familyhood, Mormon style? 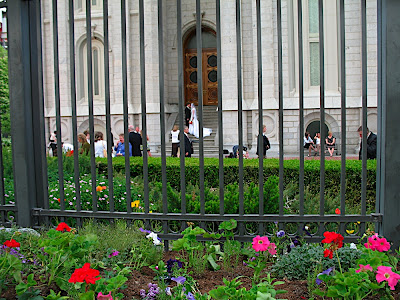 Speaking of empty and spooky: we visited the Kennecott Copper Mine, just south of SLC. It's the world's largest pit mine. The scale is hard to parse, until you realize the trucks are almost 20 feet tall and there are dozens of them roaming. There are no people visible, only giant vehicles moving slowly or waiting patiently in line to be filled with excavated earth. The only sound is periodic far-off horns and occasional beeps.

The streets are wide, I understand, because Brigham Young insisted they had to have the capacity to allow a wagon pulled by a team of oxen to negotiate a u-turn. Really.

That's exactly right. Apparently Young had only two prophecies from God: where the City of Zion should be, and what it should look like. Part of God's plan was that the streets be wide enough for oxen u-turning.