This banner was being installed over an entrance to the Sony Metreon, next to the Sony Playstation store. 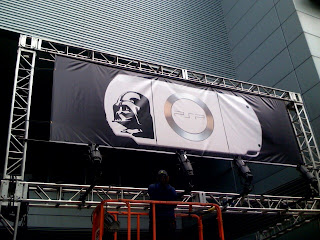 I have something to say about this. I'm old enough to think of Star Wars IV: A New Hope as THE star wars (though I saw it when it was just Star Wars, and no subtitle), and everything else as a sequel. Perhaps you will recall, the original was a really good movie, perhaps the best movie ever made. It was imbued with eternal themes of good and evil, well drawn characters (okay, they were simple, but they were well drawn), cool explosions, and the fun of an actually good Hollywood movie. I'd even say the same for The Empire Strikes Back. Both of these were before things degenerated into the Muppet filled crap of Return of the Jedi, or the bizarre, special effects demo-reel of movies meets toy commercials, meets romance novels of the recent three debacles which I can't even be bothered to remember the names of.

In the original, the Empire was a quasi-fascist regime of pure evil which existed only to destroy cuteness and unbathed humans (like you and me). It was scary, and dreadful, and genuinely menacing. Darth Vader was the attack dog, the super-warrior of a fascist regime. In an era when Solar Energy, Communes, and Non Competitive Games in elementary school were still somehow going to save the world, the Empire used machines to oppress and had become a machine. Darth Vader was man become machine become pure oppression.

Then times changed, Lucas got older, and somehow, in the 21st century (the REAL future) Darth became the protagonist of the series. It's sort of as if George Lucas got his priorities flipped around. In the 70's a cautionary fairy tale could stand to include honest to goodness evil. In the Aughts, we want to eat our evil cake and eat it sweet. The lead fascist turns out to just be a misguided and disappointed boy, like you and me (assuming that's what you are. That's what I am, dammit).

For no very good reason, it sort of reminds me of a scene in Repo Man:

Punk (bleeding to death from gunshots after attempting to rob convenience store):

"Bullshit. You're a white, suburban punk, just like me."