A post-it I had on my work desk for years

When I came in this morning my desk suddenly appeared to me as if a crazy person sat there, there was so much crap: whiskey magazines, internal corporate communications, old and current spec printouts, clean but crumpled tissues, several different pads of notes including one in the shape of a Hawaiian shirt, pens, various mugs touting internal motivation programs, broken video cards, boxes for the replacement video cards, warranty cards for software now so long extinct that the very mention of the maker brings a smile of nostalgic pleasure to any developer old enough to remember, a lot of dust, and a confusing print-out of a picture taken by a wildly eccentric co-worker, of a shanty in Shanghai standing in front of a massive, modern apartment building. I threw out most of it.

I also had a few drawings of my own on post-its, which I clung to with avid faith in their eventual usefulness. They represented something to me, perhaps a lingering belief in my artistic abilities, perhaps a notion of my very soul.

I threw those out, too. Here's a picture of one. 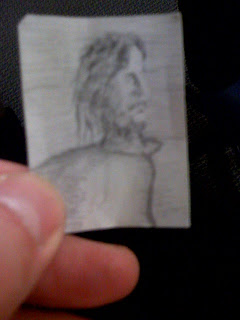 That looks like a very nice miniature to me. I'd like to see a better picture of it.

Thanks! I'll try to recover it and make a better reproduction. I was in a spirit of major purging this morning and felt a certain, willful disregard for all this stuff that I'd surrounded myself with for years.